Rwanda is a East African landlocked country and for your knowledge, Kigali is its commercial capital. The country is famous for Volcanoes National Park where you can see the mountain gorillas and golden monkeys.

The size of the country is 26,338 sq kms and the currency you can use is Rwanda francs.

Ruhengeri or Musanze is northwest of Rwanda and has Volcanoes National Park. As a result, in this park, you will be able to view mountain gorillas and golden monkeys.

Therefore, you should know that the park consists of mount Kirisimbi and 4 other forested volcanoes. On the outskirts of Musanze town, you can see caves that are filled with bats. On the East, there is Lake Ruhondo and Lake Burera.

Additionally, Volcanoes National Park has the most number of mountain gorillas that you can view, living in the Virunga Conservation area.

You can reach the park in around 2 hours and 94 kms away from capital city of Kigali and Kigali International Airport.

Most importantly, you should know Volcanoes National Park is the world’s best gorilla trekking park. The park is 160 sq kms on northern Rwanda.

Moreover, you should know that Nyungwe Forest National Park lies in the southwest of Rwanda, partly extending to the border of Burundi. Due to the huge rain forest, you can view many species of chimpanzees, colobus and owl-faced monkeys.

The Canopy Walkway as you can utilize is part of the Igishigishigi Trail. It is a high suspension bridge with views over the valley and surrounding forests. A trail runs to the Kamiranzovu Marsh, where you can see bird life, orchids and waterfall.

4 Days Rwanda Gorilla Trek is a trek in Volcanoes National Park is the world’s best gorilla trekking park. The park is 160 sq kms on northern Rwanda.

Upon arrival at Kigali International Airport, meet, greet by your driver/ guide and transfer to hotel in Kigali city.

After breakfast, Kigali City tour which includes Genocide Memorial Museum and other sights.

Hot lunch at Hotel Mille Collines -Hotel that was feature in the movie Hotel Rwanda.

Afternoon, proceed to Volcanoes National Park. The drive is around 2.5 hours.

Return to the camp for hot lunch. Later, relax at the camp.

Alternatively, perform Iby’Iwacu Cultural Village tour (Gorillas Guardians) – for some insights into the transformed lifestyle of these families of former gorilla poachers.

After breakfast, proceed for one of the activities; Rwanda Gorilla Trek to Volcanoes National Park or Golden Monkeys Trek or Dian Fossey Tomb Hike and Visit of her former research station (Gorilla Trek permit required).

Later, return to the hotel for hot lunch. Later, head to Kigali City.

• An eventually, our experienced trackers, who have spent their entire lives in or close to this forest, soon bring us up close with one of the Gorilla families

• Upon sighting the gorillas, you will stay with them for a magical one-hour as they go about their daily life, feeding, playing, resting; raising their young;

• Coming face to face with a giant silver-back must truly be one of the greatest wildlife experiences on earth!

• A Walking Stick is provided at the start-point – to help steady your trekking;

Porters are also available – to help carry your water bottle/hand luggage and/or even hold hand in slippery/steep sections. (this is at a minimal charge of US$10 per person, payable at the end)

Rates are based on All Year Round.

Volcanoes Mountains is a high altitude area of over 2,400 meters above sea level.
It is extremely chilly in the early mornings and evenings – warm clothing is therefore necessary.
While trekking, it can rain unexpectedly – it is necessary therefore to have:
• Water-proof clothing (jacket, with hood + trousers);
• Waterproof Zip-Lock bags for Cameras/Film/Passports/Money, e.t.c.;
• Hand Gloves (warm and water-proof), to keep hands warm and dry, as well as protect from stinging nettles;
• Hiking boots – with good mud-grip are most appropriate, especially in wet weather;
• Gaiters – to protect your trek trouser legs and boots against mud/wetness;
• Small hand/face towel, to wipe sweat off your face during the trek.

Price From
USD1,180 Per Person 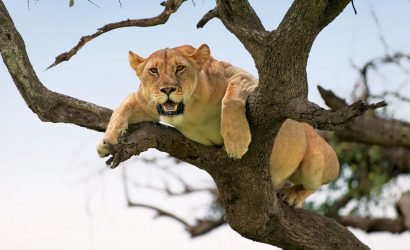